Why Egypt welcomed Islam – a bit of church history

Or this could be titled “One of the reasons I hate religion”.

Until the 4th Century AD it often cost your life to be a Christian.  There were 10 severe persecutions of Christians all over the Roman Empire starting with Nero in AD 60 and ending with Diocletian.  You thought twice before becoming a Christian since there was every chance you could lose your life, possessions and loved ones if you did.

However that all changed when Constantine embraced Christianity around AD 318.  The Edict of Milan of that year legalised Christian worship, later it became compulsory to be a Christian!  Now, not only was there no state organised persecution, it was actually of great benefit to your career in any government post to be a Christian.  Add to that the fact that there was no separation between church and state and you no longer had to think twice before declaring yourself a Christian and everyone was doing it.

The next several hundred years are characterised by huge amounts of religion and very little true Christian discipleship.

The head of the “Roman” empire moved himself to Constantinople and was effectively taken out of the way so that another head could arise –  the Pope in Rome.  However he wasn’t the only “head” at that time, there were four of them:  The Coptic Pope based in Alexandria, Egypt; the Syriac Patriarch based in Antioch in present day Turkey, the Greek Orthodox Patriarch based at Constantinople as well as the Roman Catholic Pope based in Rome.

Each of these four heads divided up the Christian world based on 4 views of the divinity and humanity of Christ.  I can’t tell you what the different views were, I suppose I should know, everyone at that time seemed to know which side they were on.

What has this to do with Egypt welcoming Islam?  Bear with me, we’ll get there.

At one of the Councils in the middle of the 5th century the then head of the Copts led an army of his followers into Constantinople.  He did this in an attempt to force their particular view of the nature of Christ down the throats of the others who had gathered there and so gain power over the Roman Empire.

In response the emperor of the day backed the Patriarch of Constantinople with a fleet and an army and imposed their view on the Copts instead.  All of Egypt – 20 million people – was ruled by Greek Orthodox governors with the Emperor’s fleet in the bay at Alexandria to help keep them in line.  (See the History of the Decline and Fall of the Roman Empire by Edward Gibbons Vol. 4, Chapter 47).

Do you think God was pleased with all this bickering?  Well it would seem not.  About the beginning of the 7th century, Mohammed and his followers began to gain power.  They became fanatical and, inspired by a religious zeal backed by direct revelation from an angel, their armies quickly gained the upper hand over the bickering and divided Christians.  It didn’t take them long to leave Arabia and conquer a vast swathe of land, all of present day Jordan, Syria, Palestine and Lebanon, Iraq and Iran and parts of present day Turkey.    In the process the Patriarch of Antioch and all his followers came under Muslim domination.  There is still a remnant left today of the Syriac church in the region but not much. 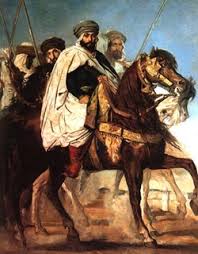 An army of 100,000 fanatical Muslims drew up near the border with Egypt and stopped.  There was no way they were going further with 20,000,000 Christians in front of them.  Or was there?

Cue, the welcome.  The Coptic Egyptians saw this impressive army and thought they could do a good job of overthrowing their unwelcome Greek Orthodox overlords.  So they invited them in (see Gibbon’s History referred to above chapter 51).  The well motivated Islamic army conquered the Greek army and sent the fleet packing.  Egypt came under Islamic rule and over the centuries since the population was pressured through discrimination to turn from being Christian to being Muslim.  Today 85-90% of the 100,000,000 people in Egypt are Muslims.

Eventually, the third head -that of the Greek Orthodox church and its capital Constantinople – fell to the Muslims in the mid 15th century.  This left only the Roman Catholic Pope left.

And that, my friends, is how Egypt welcomed Islam.  A sorry reflection on organised religion and no sign of the love of Christ anywhere.  This period was the beginning of the Dark Ages which were dark at least partly and probably mainly because of a great apostasy from Christ’s teachings (2 Thess. 2:3) even though there was plenty of so called “Christian” religion.

The similarities with the present state of Evangelical religion in the West should be obvious.