I was sitting on the third bus on the Dusseldorf Airport apron and it was going nowhere.

Next, someone is calling my name.  I see an official on the apron with my bag in front of him.  He explained to me that 121 people had been booked into the plane when in fact there was only 119 seats on it. He apologised for the inconvenience but they had been asking for volunteers and only one person had come forward.  They then chose me from the other 120 passengers as the person they would compensate for missing the plane by giving me free accommodation, a meal, a flight back the next day (Saturday) and £150 (which was quite a lot in 1996).  And they hoped that was OK.  No explanation as to why they chose me. 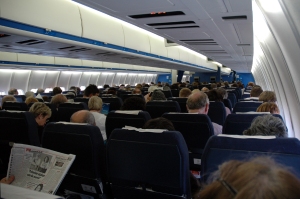 I stood forlornly on the apron waving goodbye to the other 119 passengers and joined my fellow detainee for the meal back at the airport hotel.  I can’t remember much about the meal.  My fellow inmate explained that he had volunteered to come off the plane partly because of the £150 but mainly because his fellow passenger was his boss from the Dept. of Transport who was in a foul humour at being messed about so much by Aer Lingus.

I rang Olive again, and again, and again.  Somethings don’t change much over the years and my wife’s tendency is still to either not have her mobile phone or to have it on silent or buried in her handbag where she can’t hear it.  Bless her.  Anyway, she could have saved herself a trip to the airport if she had decided to turn it on before she reached there.  When she did eventually reach the airport she rang me with rather a strange opening line:  “Hi love, I see your flight has been cancelled…” I was about to say: “No, I’m just not on it.” but that didn’t make sense so I checked with her again.  It had definitely been cancelled.

I looked up at my fellow prisoner and told him.  By this stage we had been about 2 hours at our meal and the cooks had gone home.  So we wandered up to the hotel reception and sure enough, there were the other 119 passengers and the crew coming in the door.  They had spent 3 hours on the tarmac only to discover that there was a technical fault with the airplane.

Sadly for those who weren’t chosen, a technical fault is not one that Aer Lingus compensated passengers for at the time.  So the next day I got home on an earlier flight than they did and happily took my £150 compensation.

Back to top
Constrained by Love