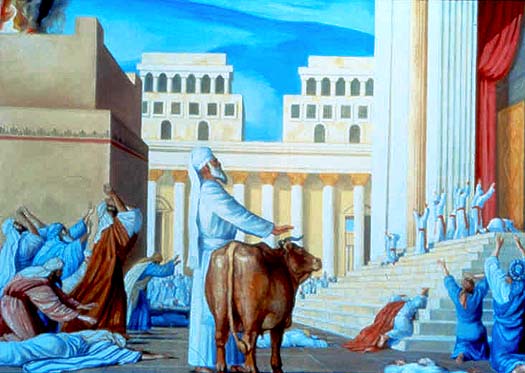 Bucking and pulling, the bullock refused to stay still.

“Come on, I guess you know you are going to be slaughtered.  Pity you can’t be like a lamb and just go quietly.”  Jacob managed to tie another rope around the bullocks head while he thought that.

It was their prize bullock, the first fruits, the tithe, that they had brought to Jerusalem to be slaughtered.  It was a big beast and not that stupid that it didn’t sense what was coming.

“Just two more ropes should do it.” Jacob looked over at his father straining to tie the ropes around the horns of the altar.  They were the strongest parts of it and once there were four ropes, one on each corner, they could begin to draw the bullock in.

Jacob knew his father loved Yahweh and was drawing on these ropes motivated by that love.  He remembered what he had been taught about the prophets Jeremiah’s and Hosea’s writings*, how God had drawn His people out of Egypt and brought them with similar cords of love during all their years in the wilderness and afterwards. The picture of a bucking and rebellious people reluctantly being led was clear as he watched this bullock’s antics.

Jacob also knew that this bullock was worth a lot and represented a significant sacrifice on the part of his dad but he also knew his dad didn’t think of it that way.  He just wanted to give his best to the God who had loved him and prospered him all his days with finances, family and peace.

The bullock was more subdued now.  The priest stuck the knife in and drained the blood from the beast.  The life of the beast was in the blood and as it was poured out so the life left the beast and only a carcass remained.

This was a whole burnt offering.  The smoke went up in billows and spread a pungent odour around the temple area.

Many years later a man with a mission called Paul wrote to some Romans and said that they should offer themselves as a living sacrifice (Romans 12:2) or, in reality, we all should.  The flesh represented by the bullock is strong and not rational.  It doesn’t want to die.  The cords of love that cause us to bring our sinful natures to the altar are strong.  They are the bindings of a God who loves us.  Like a moth to a flame we cannot help but be drawn to the death of our old ways by the look in His eyes.

“I died for you, will you not trust Me?” Jesus asks.

“My Father loves you and has only the best plans for you.  Will you not trust Him?”