This is a true story.  Sometime in mid 1996 I was in Kiel, Germany at a GSM standards meeting. It was Friday evening and I was on my way home, looking forward to the weekend.

The first leg of the journey was by train from Kiel to Hamburg Airport where I took a plane to Dusseldorf. It was then that things began to become a bit surreal. When I got off the plane I got onto a bus which brought us to a tent/ marquee. Everyone got off the bus and calmly walked into the marquee as if there was nothing unusual about using a tent to receive passengers from an airplane in a first world country. I was wondering was there a special wedding being planned or something.

Things got even more surreal after I entered the tent. The first thing I saw was a conveyor belt with luggage on it. The thing that was different about this conveyor belt was that it wasn’t a loop – if you didn’t get your luggage off it, it fell into an ever increasing pile at the end of the belt! I watched this for a while a bit bemused. I could see the airport employee loading the belt from behind a tent flap. He saw me looking at him with my bag. The dream like nature of the whole experience was reinforced when he pointed at the bag and signed that it was going straight to Dublin, which it was….

I walked on. At this stage it had begun to rain. Water was dripping down between the joints in the marquees. I walked from the arrivals marquee towards a check-in marquee. There was a long line of what looked like hot dog stands stretched out the length of the tent with queues of people at each one.
I walked along the line looking for my flight number. These were written on sheets of paper in thick black felt marker and tacked to the top of each stand. I queued up with some others at the stand with my flight number on it. At the side of each stand was what looked like a bathroom weighing scales with a couple of wires out of it. People were putting their luggage on the scales. 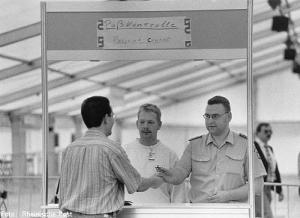 The girl behind the stand looked a bit flustered. She almost seemed to be crying when I asked her what happened: “Oh” she said, “we only got the franchise to manage the Aer Lingus luggage two weeks before the airport burnt down!”
I had been out of the country and had missed the news about the airport burning down. On the 11th April 1996, a fire broke out inside the passenger terminal at Dusseldorf Airport and 17 people were killed. I arrived a couple of weeks later.

Things made a bit more sense now. After getting my tickets I walked on to the X-ray machines which were sitting on pallets on the grass and towards the duty free tent. I pointed at what I wanted for Olive and the woman behind the counter entered the value into a handheld calculator and put my money in a grey petty cash box. I don’t think I got a receipt but then nothing was surprising me much any more. I walked over to the departures tent, found departure flap number 11 and sat down on a wooden form at the back of the area.

Much and all as I wanted to get home I was in no rush to get on the plane so I let the first and second bus leave and got on the third one.

That bus sat on the apron outside the tent and went nowhere. I could see a man remonstrating with an Aer Lingus official further along the apron.  I didn’t know it but things were about to get even more surreal…. (to be continued)