In Millennium the author combines deep biblical study with an active imagination to create an account of what life might be like for those living on the earth during the predicted 1000 years of Christ’s rule on earth.

In his account the millennium reign of Christ starts on a “possible” date of 2037 shortly after the destruction of Jerusalem by a nuclear explosion.  He deftly weaves in various biblical prophecies to create a compelling account of what it might be like to live during those times.

One of the fundamental theses of Brendan’s account is that during the Millennium there will be two types of humans living on the earth: those who are mortal and those who are immortal.  The immortals are the faithful, called and chosen ones from all ages past and up to the time of Jesus’ return who reign with Him for the Millennium.  They have a number of super powers and govern the earth ushering in an age of peace and security – unless you happen to oppose them.

Dr. Carle Zimmerman, a Harvard sociologist who examined the rise and fall of empires through the centuries, paid close attention to the correlation between family life and national life. His book Family and Civilization concludes that deteriorating civilizations follow a reasonably definable pattern and that “atomistic families” dominate the social landscape in decaying cultures. When civilizations began to unravel, they had five characteristics in common.

Zimmerman’s conclusions are so current, they’re frightening. He appears to have observed the United States in the twenty-first century and then summarized his findings. In fact, he wrote them in 1947.

Back when I was doing my Leaving Cert English course Shakespeare’s King Lear was on the curriculum.  I’m not sure was it my teacher at the time or a textbook but one of the phrases used was “pathetic fallacy”.  It referred to Shakespeare’s use of the weather in the play to reflect the action on the ground.  At the height of the worst tragedies that fell on King Lear the storms raged the worst: 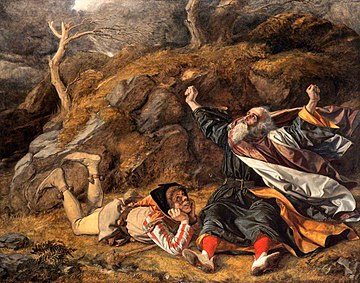 Vaunt-couriers to oak-cleaving thunderbolts,
Singe my white head! And thou, all-shaking thunder,
Strike flat the thick rotundity o’ the world!
Crack nature’s molds, all germens spill at once
That make ingrateful man!”

So the now forgotten commentator called this kind of matching of the elements to the moral events on the ground “pathetic fallacy”.

The attitude that such connections are pathetic lies is now so ingrained into our thinking that anyone who even remotely suggests in our “enlightened” western humanist society that God might have something to do with the weather is likely to face the worst of scorn.   And, indeed, caution is always advised when attributing any specific elemental actions (e.g. fires, earthquakes, floods, droughts, etc.) directly to God’s judgments especially at macro levels like nations (notwithstanding the fact that these acts are all called “Acts of God” for insurance and other purposes).

However, the bible is quite clear that God is in control of the weather whatever we might be told by English teachers or otherwise.   Here is one example taken from Zechariah chapter 10 in the Old Testament:

“Ask the Lord for rain in the springtime;
it is the Lord who sends the thunderstorms.
He gives showers of rain to all people,
and plants of the field to everyone.”

I have a number of reasons for drawing attention to this current drought and asking the question:  “Is God judging Ireland?”

One of the reasons is that I woke up with a vivid dream this morning (yes, this only confirms it, he is mad, I can hear you think).  In it, I was in a train travelling through the hills along the coast.  It could have been from Greystones to Bray or somewhere similar.  On hills away from the coast fires were breaking out all over.  There was a solitary fire man fighting one of them.  I didn’t see any houses go up in flames just gorse and hedges.  But there were a lot of fires and not enough firemen.

To be fair, you wouldn’t have to be much of a prophet to predict that in this weather in this country.

We are all enjoying the fine weather.  Ireland is known for its rain during the summer or indeed at any time of the year and so any respite from rain is usually welcomed by the majority of the people.  However when it comes to judging nations the bible does have quite a lot to say.  Usually judgement comes in the form of an invading force but in Zechariah chapter 14 there is this verse:

“If any of the peoples of the earth do not go up to Jerusalem to worship the King, the Lord Almighty, they will have no rain.”

The context in this case is (probably) the millennium rule of Christ on the earth which (probably) has yet to happen.  However the principle is the same:  When God holds back rain it is not a good thing.

We only have two fruit trees in our garden.  We have had both of them for going on four years now.  Neither I nor my wife would consider ourselves horticultural experts.  Indeed about the only things I know about looking after fruit trees I learnt from reading passages in the bible.  Particularly John 15.

So inspired by John 15 I took my secateurs (just like in the picture) and set to.

I first went looking for fruit.  One of our trees is a pear tree and it has never borne us any fruit.  I don’t blame it really, it was supposed to be pruned and trained along the wall.  Nevertheless this year it is showing some signs of fruit on one branch.  Maybe I was wrong but I didn’t have the heart to prune it much since it seems quite weak.  I thought it might find the shock of severe pruning too much and die on me.  But I did get rid of some new growth.

The other tree is some kind of edible cherry – a damson but yellow.  It produced its first small crop a couple of years ago and last year it produced a much bigger crop.  This year it is looking promising, plenty of signs of fruit on many of the branches.  So I thought – strong tree – fruit on many branches – I’ll remove the branches that are not bearing fruit and prune the ones that are a la John 15.

The fruit is quite green at this stage and easy to miss among the green leaves so I was careful to make sure there was no fruit before I removed a branch.  I noticed that if a bough was not fruitful (c.f. Genesis 49:22) then neither were any of the branches on it.  If a bough was fruitful then several – though not all – of the branches on it had fruit.  The tree was not large and neither were the boughs so I removed one particularly dead looking one and all its branches went with it – not one fruit on any of them.

I also noticed a branch that had had fruit but the fruit had, even at this early stage, been eaten or removed by birds or something.  I reluctantly removed that branch too.  At this stage it is too late in the season to presume it will bear fruit again.

When it came to pruning the fruitful branches I was quite thorough.  I didn’t want the goodness of the tree to be wasted producing only leaves so I removed new unfruitful growths and twigs.

I’ve been long enough around the Christian scene at this stage to have seen in churches the things I saw today pruning the fruit trees.  If a stream or denomination is unfruitful all that it grows is ultimately unfruitful and will end up being removed from the life giving tree.  It may lie dead on the ground for some time but eventually it is gathered by men into (building) piles and burnt.  So often only the shell remains.

I’ve also seen churches that were once fruitful but now no longer are.  They can show you the remnants of the fruit but the destroyer was let in and they also are unfruitful.

The work of the vinedresser can be sudden and traumatic.  At the right time, when the fruit is showing itself, then what is happening in the tree can be seen and it is time for the Father to act.  It isn’t easy when He does.

I believe that this is such a time in Ireland.

God has been doing a mighty work in Ireland shaking everything that can be shaken so that that which cannot be shaken – the Kingdom of God – may remain and, indeed, expand greatly.  The powers of institutional religion and the intertwined government that ruled this country for decades have been broken and a spiritual vacumn has been left in their wake.  This vacumn is felt at both a national and personal level in many peoples lives.  Many now wonder how to bring up their children, where to centre their lives.

It is for them that Jesus wants Himself to be made known through His Church – not the so called church built on the corrupt religiosity of hypocritical men whose consciences were seared as with an hot iron so that they covered up and even carried out unspeakable things – but a Church that reflects the forgiving and welcoming holiness of God built on the only foundation worth building, on that of the Word of God.

There is such a Church in this country.  It contains a small percentage of the population and has a diverse and geographically separated expression in many local assemblies throughout the country.  Now is the time for these to shine like beacons on a hill.

Never in living history in this land has it been so open to the Gospel of Jesus Christ.

All those who have a personal relationship with Jesus need to seek His will so that we can grasp this opportunity with both hands.  The window of opportunity will not stay open for long.  At the end of this period, Ireland will go one of two directions, either into the pagan syncretism of countries like Portugal and Italy or the evangelised hope of countries like Bolivia and Brazil.

Now is the time, rise up and take action!